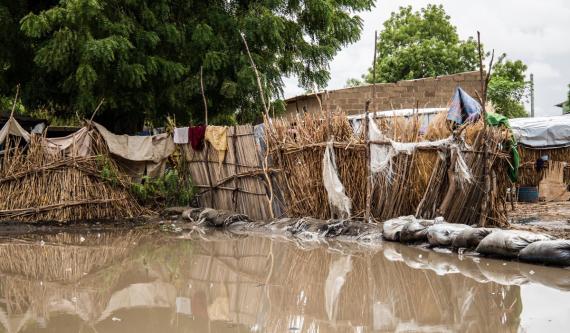 The catastrophic rains that fell this year on West Africa were made more likely because of climate change, according to a new climate attribution study from World Weather Attribution.

Scientists from 10 nations, including Nigeria, Cameroon and South Africa, analyzed data about flooding rains that occurred between May and October this year. Impacts were especially severe around the Lake Chad region, where the researchers concluded that climate change made the heavy rains 80 times more likely and 20% more intense than they might otherwise have been.

Over the lower Niger Basin, researchers concluded that climate change made the event about twice as likely and approximately 5% more intense.

At least 612 Nigerians died in the floods, as well as another 195 people in Niger. The floods reached from Mali to Cameroon, displacing thousands of people and destroying homes, crops and livelihoods. Some 1.5 million children were affect in Nigeria alone, according to UNICEF, the United Nations children’s agency.

“Apart from the above average rainfall, climate change as well as the release of several dams have been cited as causes for the devastation,” the research organization said. They included the Lagdo Dam in Cameroon.

“Both current conditions and the potential further increase in extreme rainfall over both basins, and the fact that the event was not unusual in the current climate, highlight that there is an urgent need to drastically improve water management and reduce vulnerability to seasonal rainfall,” the scientists concluded.