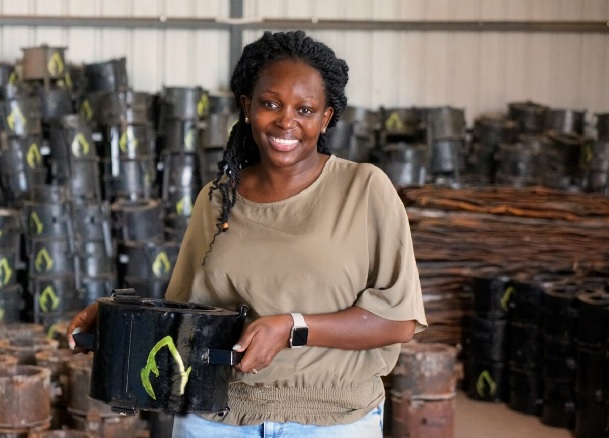 Charlot Magayi used to sell charcoal for cooking in the Nairobi slum community of Mukuru where she grew up. Today, she’s the recipient of a 2022 Earthshot Prize for her work on climate and the promotion of clean cooking alternatives.

Magayi, founder of Mukuru Clean Stoves, was one of five finalists whose work will be supported with £1 million in prize money to advance their goals. She received her prize in the clean air category after designing a cooking stove that creates 90% less pollution than an open fire and 70% less than traditional stoves.

More than 200,000 people in Kenya now use the stoves, which have saved an estimated US$10 million in fuel costs while reducing health impacts from cooking stove pollution.

About 2.4 billion people worldwide still use woods, charcoal or kerosene for cooking and heating, according to the World Health Organization. Most of them live in the world’s least developed nations, as is true on the African continent. The practice is a leading cause of household air pollution primarily affecting women and children.

These traditional methods contribute to 3.2 million premature deaths each year, WHO says, making alternatives like the Mukuru cookstoves not just better for the climate but a life-saving public health measure too.

Magayi now plans to develop an ethanol stove that’s even cleaner to use, with the hopes of reaching 1 million customers in the next three years.

“We have an opportunity to transform the lives of millions, with cheaper, safer and more sustainable cookstoves and fuels,” said Magayi. “It is a privilege to be recognized by the Earthshot Prize as we embark on the next step in our journey.”

The prize was first launched by Britain’s Prince William and The Royal Foundation in 2020, with funding partners including billionaire Jeff Bezos, Bloomberg Philanthropies, and the Paul G. Allen Family Foundation. This year’s winners also included innovators from India, Oman, the United Kingdom and Australia.