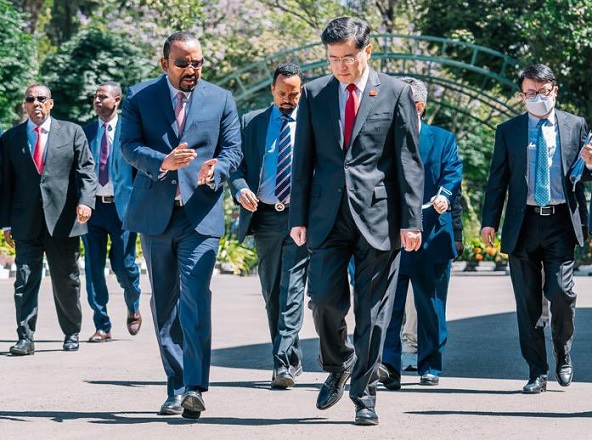 Newly appointed Chinese foreign minister Qin Gang arrived in Ethiopia on Tuesday, as part of Beijing’s tradition to begin each year with a diplomatic tour of African nations. Talks in Ethiopia focused on investment and economic development, according to Ethiopian officials.

“The relationship between the two countries remains steadfast,” said Prime Minister Abiy Ahmed, who greeted the Chinese delegation in Addis Ababa. “Our discussion today has highlighted this: our shared strategic development goals, and commitment to continental and global cooperation.”

Qin will visit the African continent through January 16, with stops at the African Union headquarters, also in Addis, and with the League of Arab States in Cairo when he visits Egypt.

“Not long ago, President Xi Jinping attended the first China-Arab States Summit, which is the largest and highest-level diplomatic event between China and the Arab world since the founding of the People’s Republic of China, leading the China-Arab relations into a new era of deepening and comprehensive development,” explained foreign ministry spokesman Wang Wenbin.

“China stands ready to work with the Arab world to build a China-Arab community with a shared future in the new era.”

Qin plans additional stops in Gabon, Angola, and Benin, while building on commitments made through the Forum on China-Africa Cooperation (FOCAC).

“It has been a 33-year fine tradition that our foreign ministers make their first overseas trips to Africa at the beginning of a new year,” said Wang. “This shows how much China values its traditional friendship with Africa and the growth of China-Africa relations.”

Qin, the former Chinese ambassador to the United States, was named foreign minister in late December. He follows Wang Yi in the role.