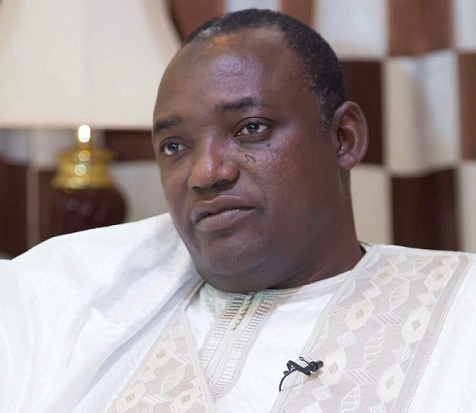 United Nations Secretary-General Ban Ki-Moon, on one of the last days of his tenure, called Gambian president-elect Adama Barrow on Thursday to congratulate him on his victory and assure Barrow that the UN supports the Economic Community of West African States (ECOWAS) in its commitments to him. Ban has not… 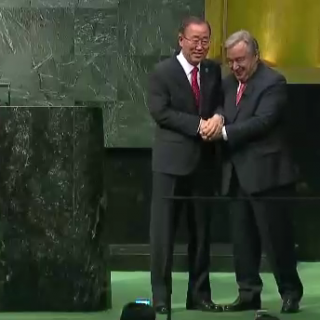 Former Prime Minister of Portugal António Guterres was sworn in Monday as the new United Nations Secretary-General, and called on the world to set aside fear in order to protect human rights and other shared values. Guterres succeeds Ban Ki-moon, who completes his tenure at the end of December. The… 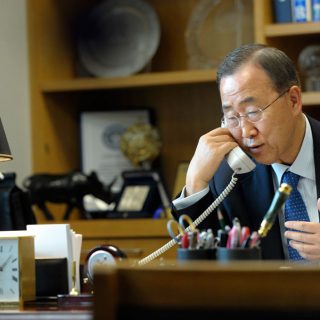 United Nations Secretary-General Ban Ki-moon on Tuesday urged President John Dramani Mahama of Ghana and the New Patriotic Party opposition presidential candidate, Nana Akufo Addo, to continue their leadership roles in keeping the peace ahead of the country’s December 7 elections. Ban made separate calls to the two leaders to discuss next…

Ban Ki-Moon was in Morocco for Tuesday’s high-level sessions at COP22, but perhaps it comes as no surprise that most of the questions at the Marrakech press conference were about Donald J. Trump, the president-elect of the United States who has denied the reality of climate change as a U.S….

U.N. Secretary General Ban Ki-Moon, in a discussion of the Sudanese conflict, remained optimistic Saturday about the hope for peace even as he stressed the causal relationships between conflict and climate that have brought so much suffering to the Horn of Africa region. “Almost invariably, we discuss Darfur in a…

On this eve of November 4, the day the Paris Climate Change Agreement enters into force, the world is focused on what everyone from global finance leaders to ordinary citizens can do to reduce carbon emissions and protect the planet from catastrophic warming. “As the world heads into COP22 in…

A spokesman for United Nations Secretary General Ban Ki-Moon has stressed the importance of Kenya’s role in South Sudan, while defending the UN report that resulted in Kenya’s swift and unusually strong decision to withdraw more than 1,000 troops from the UNMISS peacekeeping mission. “We have not been officially appraised…

UN Secretary General Ban Ki-Moon plans to implement new measures for the United States Mission in South Sudan (UNMISS), designed to ensure greater accountability and better protect South Sudanese civilians. The UN decision follows an independent investigation of the violence that spanned days marked by chaos in and around the…

U.N. Secretary General Ban Ki-moon is urging the Ethiopian government to ensure “the protection of fundamental human rights,” the AP reports. A Ban spokesman said Monday the Secretary General “reiterates his call for calm” and urges inclusive dialogue in Ethiopia. The United States also has expressed its concern over Ethiopia’s…

The United Nations General Assembly formally appointed António Guterres as the next UN Secretary General on Thursday. The 67-year-old Guterres will succeed Ban Ki-moon when he steps down at the end of the year. Guterres, the former prime minister of Portugal, served as the head of the UN High Commission on…

International response was muted Monday following a weekend decision by the Constitutional Court in Gabon to uphold the contested August re-election results that return President Ali Bongo to office. United Nations Secretary-General Ban Ki-moon called for restraint and respect for human rights in a statement Sunday, while welcoming Bongo’s appeal…

In the midst of the worst drought in 50 years, Ethiopia’s population finds just some relief in the rain reaching parts of the country, Thomson Reuters Foundation reported. In February this year the United Nations World Food Programme (WFP) wrote that over ten million people are in need of food…

“There is a lot of work to do here in Paris, and the stakes are very high, especially for the most vulnerable people and countries,” said UN Secretary-General Ban Ki-moon at COP21 today. “Science tells us we have only a few years left before the window could close on our…

Concerns about violence in Burundi are continuing to increase. Yesterday, a son of a Burundian human rights activist was killed after he was arrested, reported AP. United Nations Secretary General, Ban Ki-moon released a statement yesterday declaring that “the recurring violence and killings in Burundi must stop”. The statement continued…