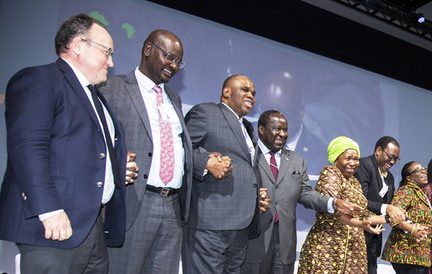 The Africa Investment Forum ended Friday with some 45 deals worth over US$32 billion set in motion with secured investment interest, and a promising emphasis in the continent’s Lusaphone nations.

More than 1,000 delegates attended the three-day event in Johannesburg, according to the African Development Bank (AfDB). South Africa, Germany and the AfDB also held the annual Compact with Africa Investor Event, following on the success of last month’s G20 investment summit in Berlin.

A $ 2.6 billion MOU signed between South Africa and Ghana for a Skytrain project in Accra demonstrated the commitment to Africa-Africa investment, as well as overall foreign direct investment. Energy, infrastructure, food and agribusiness  also attracted high-level attention from global and African investors.

Heads of state including host President Cyril Ramaphosa and new Ethiopian president Sahle-Work Zewde attended the forum. “The Africa Investment Forum is fundamental to changing the narrative on Africa,” the first female Ethiopian president said. “Looking at Africa only through the lens of peace and security is not getting us anywhere. We have to address perceived risk (on the continent) and have to change this mindset.”

“The needle is shifting, pointing to the right direction, pointing to Africa,” said Akinwumi Adesina, president of the AfDB. “I am thankful for the investors, I am thankful for the confidence they have in Africa. Africa has grown up. Africa is not going to be developed by aid. It will be developed by investment and I think you are beginning to see it.”

The Lusophone nations announced more than $5 billion in projects in AfDB partnership with Portugal and the six Portuguese-speaking countries of Africa: Angola, Cabo Verde, Equatorial Guinea, Guinea-Bissau, Mozambique, and Sao Tomé and Principe.

“Today is a day of delight, when we shine the light on a part of Africa that doesn’t always get the attention it deserves,” Adesina said. “Lusophone countries, home to 267 million people worldwide, possess a wealth of natural assets. Lusophone countries in Africa have huge resources like oil and gas, yet human development is low, and infrastructure development is low.”