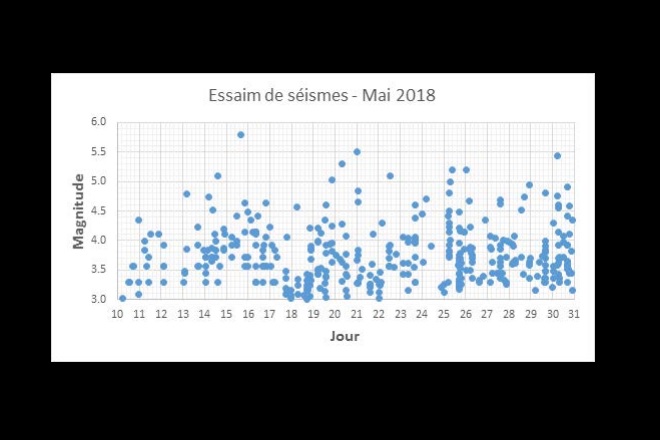 A team of French government specialists in seismology and civil security arrives in Mayotte on Friday, as the small Indian Ocean island continues to experience the jolting of an earthquake swarm that began on May 10.

Their arrival follows a request for support from Dominique Sorain, the new prefect for the island, as schools closed in some parts of the island as a precaution and the shaking continued to disrupt routines.

Another four earthquakes measuring greater than 4.0-magnitude happened on Thursday, which the prefect’s office described as a “slight lull in seismic activity in the last 24 hours compared to yesterday.”

Hundreds of earthquakes have been recorded since the swarm – consistent with seismic activity last seen in the 1980s – began. They include a 5.8 magnitude earthquake on May 15, the largest ever recorded in the Comoros archipelago region that includes Mayotte.

Three people had minor injuries, with some building damage reported. And as those cracks continue, Mayotte officials are focused on their preparedness and response.

In an updated statement Wednesday, BRGM Mayotte – the France-based geological agency serving the territory – said Mahorans continue to feel rumbling earthquakes that included a 5.4-quake in the previous 24-hour period, equal to the second largest since the episode began. The agency is now completing an update every day and said that a larger event cannot be ruled out, in part because of the limited knowledge about the region.

The BRGM said other earthquakes of similar magnitude will likely be felt in days to come. “These earthquakes do not produce damage and, although at sea, are too weak to generate tsunamis,” the agency said.

Mayotte, a troubled territory disputed by neighboring Comoros and the French, does not have a history of large or frequent quakes. A 5.2-magnitude event in 1993 previously was the strongest recorded in at least 60 years, and no destructive earthquake greater than a 6.0 is recorded at the island.