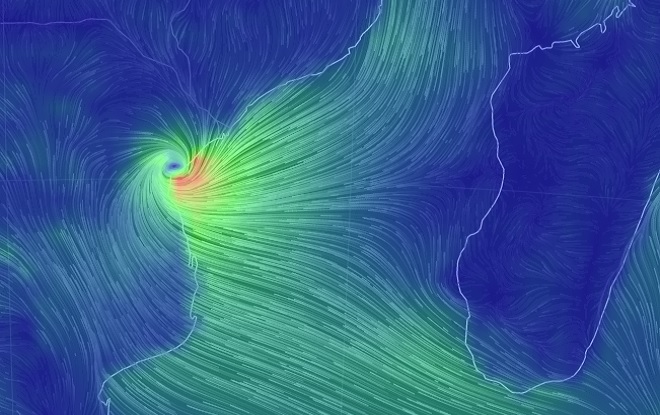 The city of Beira in Mozambique was in total darkness as Cyclone Idai arrived Thursday, cutting off the power to a half million people who were waiting for daylight to assess the destruction from the storm.

Cyclone Idai made landfall with the city squarely in its sights, arriving late Thursday into early Friday with sustained winds of 175 kilometers (109 miles) per hour and gusts of 213 km/h. The Instituto Nacional de Meteorología issued a high-level red alert for the storm for the provinces of Zambézia, Sofala and Inhambane, while President Filipe Nyusi urged citizens to seek shelter and cooperate with authorities.

The storm appeared to intensify slightly just before landfall, and was likely to deliver a significant storm surge. There were no immediate reports of injuries or fatalities from this new storm strike, although 66 people in Mozambique and 56 in Malawi have died in Idai system-related flooding since early March.

Idai is forecast to bring heavy rains well inland, and is likely to inundate some areas already affected by the fatal floods before crossing into Zimbabwe.

Earlier damage also left much of the region inaccessible, which may hamper relief efforts. There are 1,583 kilometers of road in five provinces of central and northern Mozambique that are damaged, including Sofala where Beira is located. Also destroyed are 11 bridges and related infrastructure.