Home>Politics & Policy>Afwerki defends Russia, China in Eritrean Independence Day speech
By AT editor - 25 May 2022 at 2:59 pm 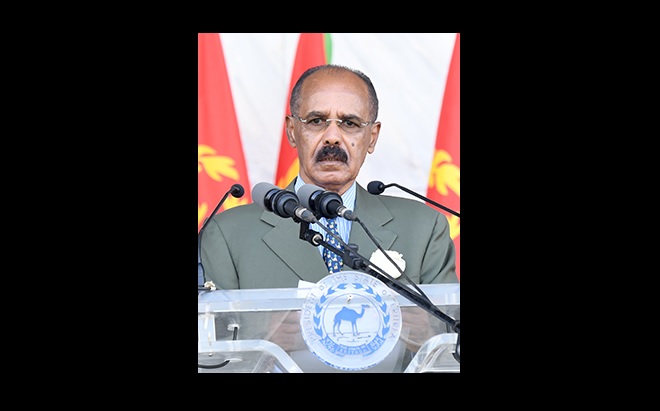 President Isaias Afwerki, authoritarian leader of Eritrea, defended both Russia and China while holding the West responsible for the situation in Ukraine, during a speech marking Independence Day in the Horn of Africa nation.

Afwerki, in office since 1991—a tenure that places him among Africa’s longest-running leaders—drew parallels to his own nation’s struggle against colonialism and the modern-era critiques of his repressive government, while making the case for African independence and sovereignty.

He placed the current battle over Ukraine within the context of the Cold War and its ending, which coincided with Eritrea’s own independence at a point where Western “elites of domination misconstrued the end of the Cold War as a ‘historical opportunity.'”

“They embarked on a policy of ‘containment’ of Russia, which was then perceived as their primary rival within a broad strategic framework,” Afwerki said. “In tactical terms, the east European countries situated within proximity of the Russian borders were chosen as vehicles for the ‘containment policy.'”

Ukraine and other eastern bloc nations have been the victims of this post-war global order, he said, citing strategic policy tools like sanctions by the United States and European Union, to which his own nation has long been subject.

“The elites of domination did not target Russia alone,” Afwerki continued. “By the same token, they embarked on the containment of China not only through instrumentalizing Taiwan and Hong Kong but also by incubating various alliances and rivalries in Asia as a whole.  The danger that this poses will not be less, if not much greater, than what has transpired with Russia.”

Eritrea reportedly remains among the African nations willing to host a Russian military base, particularly given its location along the Red Sea and the critical Suez shipping route for Russian oil.

In March, Eritrea was one of just five nations to vote against a United Nations resolution that called on Russia to immediately end the invasion of Ukraine.