Home>News>Young Africans march in school strike to demand climate action
By AT editor - 15 March 2019 at 10:39 pm 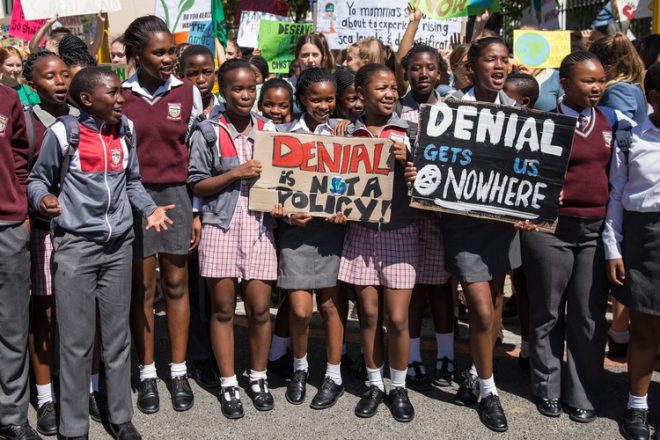 Students in Kenya marched to the edge of the Karura Forest in Nairobi to demand action on climate change, joining young people in 123 countries who participated in Friday’s Climate Strike – a massive undertaking in more than 2,000 cities.

“Every single person who came out to march today is making a difference in our world,” organizers said. “We are the youth. Our future is in our hands.”

Greenpeace Kenya answered those activists with their own message: “And the youth have and will keep speaking on matters that concern their future.”

Kenyans were joined by student activists in Namibia, Madagascar, Tanzania, Ghana and other nations, including Uganda where groups defied government attempts to shut down protesters without permits.

“Incredible! Over one million students on school strike for the climate,” said Greta Thunberg, the 16-year-old climate activist from Sweden who launched the school strike youth movement, as she encouraged people from around the world who took part.

South Africans took to the streets in Cape Town, Durbin, Johannesburg and Pretoria, marching on the parliament and other government facilities to demand change. Their signs pressed leaders to end denial about climate change, which already affects Africans and leaves them more vulnerable in the future.

“Greenpeace Africa is humbled and inspired by the thousands upon thousands of school children coming out today to demand action on the climate crisis,” the South Africa-based organization said in a statement. “They clearly understand that climate change is a threat to their opportunities and future. Our youth are sick and tired of excuses and want to see bold action to avoid catastrophic climate change. The question is: how can governments possibly ignore their call?”