Home>News>World Drug Report traces trafficking across Africa
By AT editor - 23 June 2017 at 6:35 am 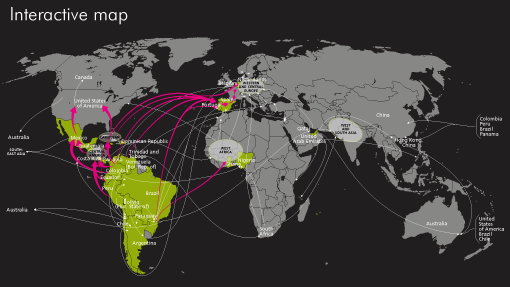 Maps of the migration routes from places like Somalia or The Gambia into Libya and other North African states illustrate some of the continent’s most pressing economic and security challenges – but there are other illicit flows often associated with them.

The new World Drug Report 2017, released on Thursday, traces the routes by which heroin, cocaine and other drug trafficking is conducted while illustrating some of the links to armed jihadist organizations and their operations.

The report, issued by the United Nations Office on Drugs and Crime (UNODC), shows Ghana and Nigeria among the most frequently mentioned countries of origin in Africa for cocaine trafficking when identified after a seizure of a drug shipment took place. Routes through West Africa originating in South America are clearly marked.

For opiates – much of it passing from Pakistan, or Afghanistan through Central Asia – it was Tanzania, Kenya and Nigeria that saw the highest traffic.

“Some evidence suggests that Al-Qaida in the Islamic Maghreb, which operates primarily in North and West Africa, has been involved in cannabis and cocaine trafficking, or at least in protecting traffickers,” said the report section focused on terrorism and organized crime. “Individual commanders of the Movement for Oneness and Jihad (MUJAO) in West Africa, which broke away from Al-Qaida in the Islamic Maghreb, seem at present to be directly involved in drug trafficking.”

Boko Haram is implicated in smuggling heroin and cocaine across West Africa as well.

The report also includes an interactive map to explore where drug consumption is prevalent for nine different classes of drugs. To check out the map, see this link.