Home>Commentary>Uganda's fever spikes over age limit bid – and yet another African leader's tenure
By Laureen Fagan - 21 September 2017 at 11:26 pm 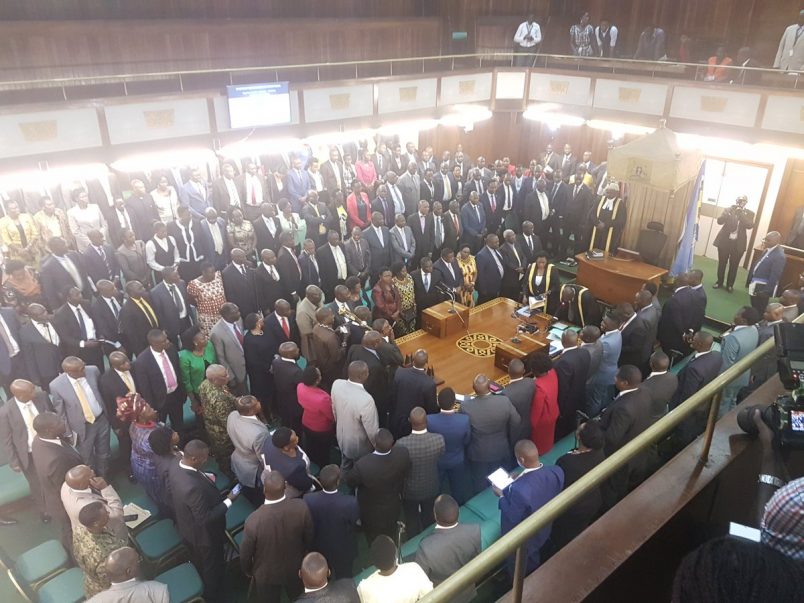 The rising tide of tension in Uganda over presidential eligibility age limits spilled into and shut down the country’s parliament building on Thursday, as the discourse among ministers inside the chambers became as contentious as the heavily-guarded streets outside in Kampala.

Opposition political leaders demanded to know why there was such a heavy security presence, amid allegations that some MPs and other political leaders have been detained in the latest round of incidents curtailing the activities of elected officials, NGOs and activists. They were told by Prime Minister Ruhakana Rugunda – who had been scheduled to address parliament – that the additional security was necessary because of threats made against the legislature as they were to introduce a bill that would remove the existing age limitation of 75 years for presidential candidates.

That move, which would allow the 73-year-old President Yoweri Museveni to run again in 2021, has sparked protest across Uganda and ultimately led to Deputy Speaker Jacob Oulanyah’s decision to adjourn.

“The speaker is not ready to chair a Parliament that is not ready to sit. This House is adjourned” until Tuesday afternoon, he said, emphatically ending a session in which the fiery rhetoric over the age limit was amplified by new outrage over the security crackdown. He also told opposition leaders that if they make statements warning there will be war in parliament, they should not be surprise when security forces are deployed. Oulanyah later appealed for calm from all Ugandans. “We do not need violence,” he added in social media messages. “With dialogue we can solve anything.”

Opposition MPs celebrated the decision to adjourn, after the main Forum for Democratic Change (FDC) party had notified Speaker of Parliament Rebecca Kadaga on Wednesday that the FDC planned to oppose the age limit and other proposed constitutional amendments. Yet there remains little cause for jubilation as Leader of Opposition Winnie Kiiza of FDC promised there would be no “business as usual” as Ugandan security forces surround the building and use force around the country.

Ugandan police, ahead of the ill-fated Thursday parliamentary debate, banned all public protests against the age limit changes. Asan Kasingye, a spokesman for the national police, also issued a statement asking fuel dealers and petrol stations to curb sales to anyone using a container. He said the additional instructions about criminal acts followed “credible intelligence that there are wrong elements in and around Kampala, who wish to cause violence and even commit arson.”

Yet the protests continue. Police fired teargas at Makerere University students who led protest marches and threw stones on Thursday in defiance of the ban on demonstrations. Kasingye told reporters the teargas was necessary because “we are not going to allow anybody to hold protest marches.” Kampala Mayor Erias Lukwago was arrested, amid reports that some politicians – including the oft-detained former FDC presidential candidate Kifefe Kizza-Besigye – were under house arrest.

Police also shut down a Bushenyi district march against MP Raphael Magyezi, the ruling National Resistance Movement (NRM) party member who was supposed to introduce the age-limit amendment on Thursday. The protests and clashes come in a week when at least 10 students in Kampala were arrested for illegal assembly on Monday, and eight students were injured by teargas in Iganga district on Tuesday.

On Wednesday, some 60 police officers raided the Action Aid office in Kampala – an NGO critical of removing the age limit — and detained all staff, cut off Internet access and searched the premises. They left just before 1 p.m. Thursday, taking the staff computers and phones with them. Police said the organization “received funding to destabilize the city” in a later statement explaining their investigation.

Concern over yet another African term-limit crisis

Museveni himself is attending the United Nations General Assembly in New York City, far from the clamor over what many view as an obvious attempt for the leader – in power since 1986 – to stay there, as has been the case in Rwanda, Burundi, Democratic Republic of Congo and elsewhere. It’s been met with the same sense of violation among Ugandan citizens, and the same use of force to silence critics.

Yet what Museveni left behind is reaching the ears of international leaders concerned about Uganda. The European Union delegation, in a statement issued Thursday, expressed alarm over “the build-up of tension in and outside Kampala that might lead to infringing the fundamental freedoms of Ugandan citizens and damage the country’s international reputation.”

The EU paid special attention to the arrest of political activists and NGO staff, but also expressed concern over “inflammatory language used in debating issues of national interest, pertaining to the democratic process in Uganda.” The statement issued by the EU, on behalf of 12 member states as well, was echoed by the United States.

“We call on the Government of Uganda to guarantee all its citizens freedom of speech, expression and assembly, without fear of intimdation,” said U.S. ambassador Deborah Malac. The U.S. Embassy, reporting both teargas and gunshots during Thursday’s demonstration, also urged citizens to avoid downtown Kampala, the Kiseka Market area, the Clock Tower intersection and the university. The Amnesty International organization also issued a statement condemning the crackdown.

The one person, it seems who hasn’t spoken about the chaos prompted by a constitutional change that would allow him to run for president again is Museveni himself. Perhaps, as he meets with world leaders this week, it’s the Ugandan president who did away with constitutional term limits in 2005 who next needs to speak about what’s happening in his country now. Perhaps also it’s his peers in the international community who shouldn’t be attending dinners and holding meetings while turning a blind eye, yet again, toward an African leader changing the laws against the will of his people so he can stay in command for life.