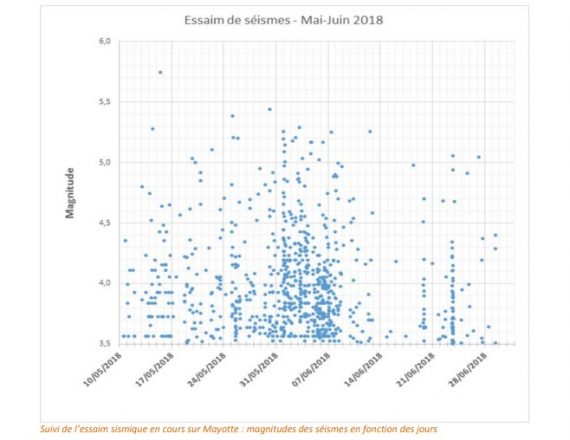 It was June 14 when officials in Mayotte opened up a psychological support services unit, designed to help residents deal with the stress of hundreds of earthquakes they’ve experienced as part of the ongoing seismic activity the Indian Ocean island nation has endured for weeks.

The situation has “caused concerned reactions among the population,” according to the prefecture, which issues daily updates on the earthquakes.

Those updates on a seismic swarm that began May 10 are mirrored in reports from the Bureau de Recherches Géologiques et Minières (BRGM), the France-based geological agency serving the territory. And those reports keep coming, nearly two months after the shaking began.

The most recent BRGM report, issued Friday, shows another two earthquakes of magnitude 4.0 or greater, and six quakes between 3.4- and 3.6-magnitude for the previous 24 hours. While the activity seemed to have slowed in mid-June, it came roaring back last Sunday with dozens of smaller earthquakes and one that topped out at a 5.1 magnitude. There were 17 more on Monday, and 12 more on Tuesday – including another 5.0 – followed by a comparable quake on Wednesday.

Almost all of the seismic activity is in the same spot about 50 kilometers to the east of the island, with the largest 5.8-magnitude quake occurring on May 15. It also was the largest ever recorded in the archipelago, surpassing a 5.2-magnitude event in 1993 that had previously been considered the most powerful.

While there have been no reports of serious injury or fatality, the constant shaking has created anxiety and uncertainty for some of the 250,000 people living in Mayotte as well as visitors to the tourism hotspot. Some minor damage has occurred to buildings, including a school in Dembeni. At least 10 families have been evacuated from damaged homes and relocated, at least until the threat passes.

The problem is that it never does.

Coping with the quakes

The phenomenon has led to a flurry of emergency activity on the island, which remains a territory of France amid the long-standing dispute with Comoros, the group of islands to which it geographically and culturally belongs. Both lie in the Comoros Basin, at the northern edge of the Mozambique Channel between the southern African mainland and Madagascar. The quakes likely are the result of a seismic hotspot as well as the island’s position along the East African rift, the BRGM said, but there’s uncertainty about why this swarm is happening now.

So Mayotte’s firefighters are conducting drills designed to simulate rescuing people trapped by a landslide, and emergency experts are teaching island residents to check their homes and businesses for cracked walls or other signs of stress. In the meantime, they’re trying to deal with their own stress too.

One resident of Mamoudzou described leaving home because of meters-long cracks in the walls, along with an 80-year-old mother who had become agitated by the hundreds and hundreds of quakes that are big enough to feel. Many people slept in the streets during those first days in May, unsure if the shaking would become worse and potentially collapse their homes and trap them inside. Others began to have anxiety attacks, with each quake followed by dozens of calls to Mayotte’s regional health authorities.

“Some teachers are on sick leave because they do not sleep at night,” said the head of Pamandzi College in a television interview. “Other teachers do not plan to return to Mayotte after the school holidays if the seismic activity continues.” Still others remained concerned over student performance on their final exams, which were scheduled for the end of June.

As the calls added up, local government officials and representatives began requesting assistance, and that included help with the mental health impacts to the population – described by Overseas Minister Annick Girardin as feeling abandoned and traumatized. She also requested additional scientific support, since the previous two research missions dispatched to the island ended in “inconclusive” results on what exactly is happening beneath the nearby sea and how that’s affecting Mayotte and its people.

There’s no end in sight

In recent months, Mayotte was already on edge over illegal migration and economic woes. Protests have erupted, and last week two soldiers were seriously injured when rocks were thrown in Bandrele. Five people were arrested in the incident, which led to another round of protest marches on Tuesday.

So the additional stress and disorientation of the shaking hasn’t helped, and each day the BRGM experts conclude that the earthquake swarm is “continuing.” The quakes remain at sea, and aren’t strong enough to pose any tsunami threat; many are too small to feel, but that’s no consolation to an uneasy population that remains acutely aware of the possibility that another quake will come at any moment.

“Seismicity close to Mayotte is less well known,” the BRGM admits, “but earthquakes causing damage have already occurred in the past.” The quake experts fully anticipate the swarm to continue indefinitely and have no way of predicting when the island residents will see any relief. The lulls in activity, at least so far, have been followed by an uptick in renewed shaking.

“Other earthquakes are likely to be felt by the population in the hours or days to come,” the BRGM says. “Strictly speaking, and given the limited knowledge in the region, a tremor of magnitude higher than those already observed cannot be ruled out.”