Home>News>Beyond Paris, the 'Gilets Jaunes' protests continue to rile Reunion Island
By AT editor - 25 November 2018 at 7:01 am 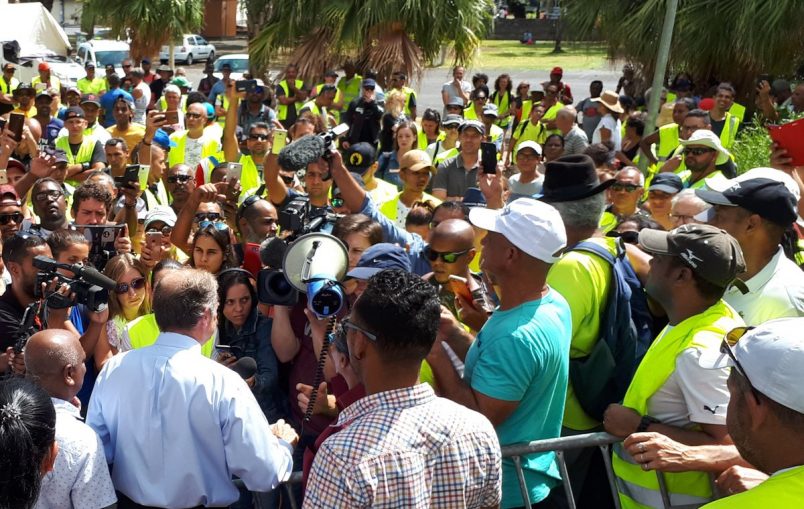 The “Gilets Jaunes” movement across France, a grassroots political opposition that takes its name from the yellow vests worn at protests, brought Paris to a standstill on Saturday as clashes and teargas filled the air – but France proper isn’t the only place seeing yellow-vest protests.

The movement has taken hold on Reunion Island too, where last week’s protests became chaotic enough for President Emmanuel Macron to activate troops to maintain order and Overseas Minister Annick Girardin to head there for an emergency visit. The island is a French territory east of Madagascar, and near Mauritius in the Indian Ocean.

Protesters again poured into the streets on Saturday near the prefecture in Saint-Denis, where Amaury de Saint-Quentin met with them near his office. The prefect has locked down the city as well as 13 other communities this week, during overnight hours through Sunday because of public safety concerns.

“Many acts of vandalism and violence continue to be perpetrated by groups of individuals of up to several hundred people engaged in abuses,” the office said. “If dozens of arrests have already taken place, it is necessary to continue to prevent the repetition of these actions, whose number and violence are increased during the night.”

At least 139 people had been arrested through Saturday morning. Some 39 gendarmes have been injured as protesters frustrated with Macron’s leadership and the economy take to the streets. The crisis closed schools and shut down fueling stations, in order to avoid sales to activists starting fires.

The Gilets Jaunes are protesting France’s high taxes, including a hike in fuel taxes that sparked the new protests, with many demanding Macron’s resignation.