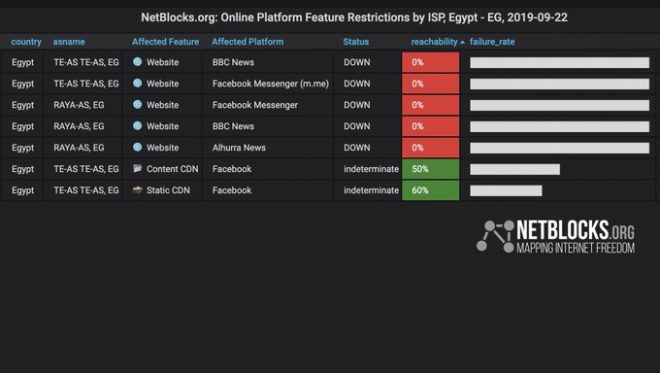 Egyptians were experiencing some Internet disruptions on Sunday as protests against President Abdul Fattah al-Sisi continued into the weekend, with service interruptions that appeared to target news sites and social media messaging.

NetBlocks.org, an organization that tracks shutdowns and disruptions across the globe, reported that BBC News and other news sites were unavailable in Egypt. Some Facebook services also were blocked.

“Technical measurements show that the social media and messaging platforms became unavailable on Telecom Egypt and Raya on Sunday, amid heightened political tensions following the publication of videos alleging state corruption,” said NetBlocks, referring to the Mohamed Ali posts. “Egypt has seen some of its first political demonstrations in years after the political videos went viral on social media.”

NetBlocks said its data confirmed widespread reports from users who said they were having difficulty accessing Facebook Messenger and other services.

“The new instances of network filtering are likely to impact media freedom and the rights to free assembly and association at a time when dissent is already limited in Egypt,” the organization said.

Protests that began Friday have spread from Tahrir Square in Cairo to other cities, with dozens of clashes with security forces and arrests reported. At the same time, attention to Sisi’s record on human rights, always under scrutiny, was elevated as he arrived in the United States to attend the United Nations General Assembly meetings.