Home>African Future>Kimani praised for Kenya's commanding UNSC presence on Ukraine
By AT editor - 22 February 2022 at 5:58 pm 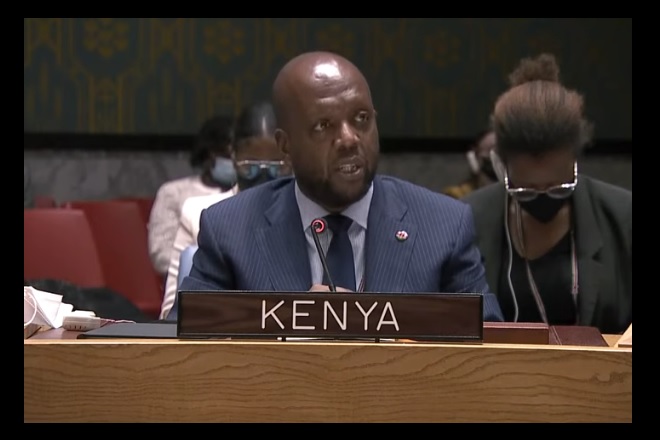 Martin Kimani, the Permanent Representative of Kenya to the United Nations, made perhaps the most compelling case against Russia’s moves in Ukraine during an emergency meeting of the United Nations Security Council meeting late Monday.

In fact, Kimani himself is making international headlines for what was both a direct and diplomatic presentation of Kenya’s concerns in protecting the sovereignty and territorial integrity of Ukraine, all while offering a uniquely African viewpoint on empire directed at the West as well as Russia.

“Kenya and almost every African country was birthed by the ending of empire. Our borders were not of our own drawing,” Kimani said. Rather, those decisions were made in London, Paris and Lisbon during the colonial era.

“Today across the border of every single African country live our countrymen with whom we share deep bonds,” Kimani continued. His tone and eloquence conveyed a deep understanding of the border conflict between Ukraine and Russia, but he went on to explain why Kenya insists on diplomacy as a better path toward the future than Russian occupation of Ukrainian territory.

“We believe that all states formed from empires that have collapsed or retreated have many peoples in them yearning for integration with peoples in neighboring states,” he said. “This is normal and understandable. After all, who does not want to be joined to their brethren and to make common purpose with them?

“However, Kenya rejects such a yearning from being pursued by force. We must complete our recovery from the embers of dead empires in a way that does not plunge us back into new forms of domination and oppression.”

Kimani’s UN Security Council remarks were widely praised for their moral clarity, with some observers noting that it was the single best speech given in that forum in recent years. Gabon and Ghana, nations that also currently hold seats on the council, also expressed support for Ukraine and called for a return to diplomacy.

“Kenya, through its UN Ambassador, made as compelling and eloquent an argument that one can make for a permanent African seat on the UN Security Council,” said W. Gyude Moore, a senior policy fellow at the Center for Global Development and a former Liberian government minister. “Couldn’t have been more proud of Africa’s representative.”