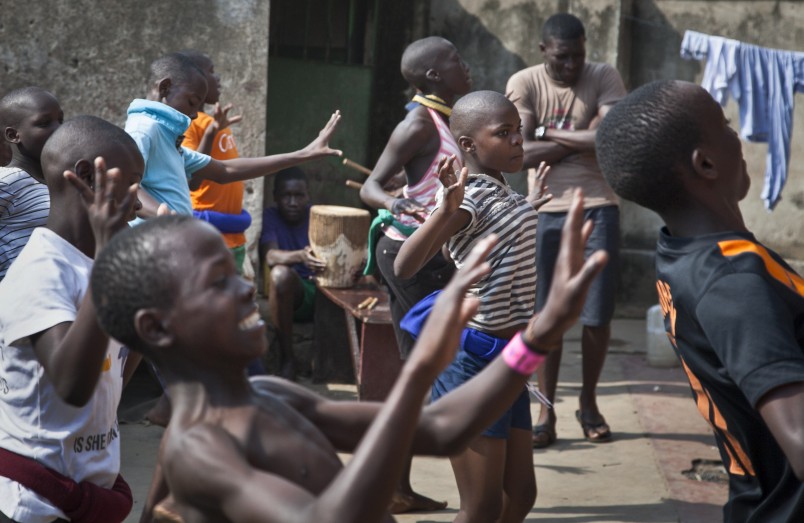 In the evenings, when the children are returning from school and the men and women are retiring from a hard day’s work, Wakaliga – a slum in Uganda’s capital, Kampala – bursts into a merry film set. There are no managers or PR teams as the characters of different movies, that blend together just for this auspicious occasion, wave one dollar DVDs at gripped fans.

The flamboyant costumes from the fantastic movies made in Wakaliwood, Uganda’s budding action-comedy film industry based in Wakaliga, are an important part of the fanfare. A child scampers for dear life when Dauda Bitaso “the mad man”, dressed in rags and face painted black, makes a go at him. He stops at a safe distance and giggles, daring Dauda to catch him if he can.

A woman stares in shock at the fleet of “night dancers” who appear naked, nothing but banana leaves – a key part of their sorcery trade – draped over their flesh coloured tight underwear. Kigongo Brian is dressed in full Ebola extermination garb, complete with a black menacing mask. This is the costume for their upcoming movie “Tebatusasula: Ebola.” The prequel, Tebatusasula, was popular and the fans that swamp him and pose for pictures belie the danger of the disease that killed hundreds in West Africa and nearly ground national health systems to a halt.

Infinite fantasy is the business of Wakaliwood. Here, the open sewage flowing right in the middle of the neighbourhood is invisible. On a warm evening like this one, no one is thinking of the wobbly houses that will become almost uninhabitable once the rains set in. The flailing economy, the police that routinely brutalise peaceful protestors in a bid to keep the thirty-year-old regime in power, the occasional reports of hunger and disease… these disappear at the height of Wakaliwood frenzy.

But these and worse were the realities for Isaac Nabwana, Director of Ramon Film Productions, Wakaliwood’s film production company. He grew up in Wakaliga at a time when children raised in slums were a write-off. Nabwana’s parents, raising him during a period of chronic political instability and coups, could only afford to give him minimal education. He spent most of his time farming to supplement his family’s income. His peers, however, would go to video halls and return home talking about awe-inspiring characters like Chuck Norris, Rambo and Jackie Chan.

“I did not always watch the movies but I had the pictures in my head,” he says. “So I decided that we should start acting these movies for ourselves here in Uganda.”

Nabwana only heard of a script much later. At first, the actors simply acted.

“I did not go to school and I had to teach myself everything. I started writing scripts. I had to learn how to shoot and I had to learn (film) editing within six months. I did not have the money to stay longer like other students,” there is not much pomp or flair in the way Nabwana speaks. It is almost as if he is reserving it all for his movies, whose hallmark is eccentricity.

In these movies, one bullet could be shot out of a simple gun and an entire building catches fire. But the occasional simple gun is the exception. Usually, they prefer to use eight barrelled machine guns and mind blowing, blood spluttering grenades. Unlike in Hollywood where action movies are high budget, it does not cost much to create a Wakaliwood movie.

“We estimate it at 200 USD but the truth is sometimes there is no budget for the film. We make films out of nothing,” says Alan Hofmanis, an American filmmaker who sold all his belongings, scraped together his savings and left New York to settle in Wakaliwood for the chance to be a part of the action.

The helicopter and guns used in Wakaliwood are made from scrap metal. Dauda, “the mad man”, is also the weapons smith. Whenever he sees a weapon he admires, online or in real life, he draws sketches, discusses them with the team and they come up with something uniquely Wakaliwood.

“It is a new genre that we have created,” says Hofmanis who believes Wakaliwood movies are set to give Nollywood, Bollywood and even Hollywood a run for their money.

Hofmanis is most popular for playing Jesus, a role he embraces in real life, growing out his hair and beard. On the evenings when they sell DVDs, he has a bit of trouble making money because, as Jesus, he is expected to give out things free of charge. He laughs slightly at the notion and scoffs at the idea that he left a “comfortable” life in New York to settle in what, to many, is no more than a slum.

“I love it here,” he says. “I knew there was something special the moment I saw the trailer to ‘Who Killed Captain Alex’. I had to come out here and see what it was.”

And what it really is – is the way spending eight hours in Wakaliwood makes you feel giddy like a child who just visited Disney land – or a chocolate factory. The trailer to ‘Who Killed Captain Alex’ has been viewed by over two million people on youtube. One fan describes the hyperbolic action as “so bad it is good.”

It is not just the enthralling resilience of Nabwana and his wife Esther, who are determined to rewrite the script for themselves and their children, all of whom, when not studying, are actors in the Wakaliwood movies. It is the enchanting way in which an action movie industry that sprung out in the most unlikely corner of the world has grown to have fans from every continent, people young and old joining in the frenzy and sending their own home-made Wakaliwood videos.

You see, Wakaliwood movies manage to embody eccentricity and simplicity at the same time.

“Anyone can relate to them,” Hofmanis says. “It lets you know that you, too, can be a star in your own backyard.”

Mornings in Wakaliwood begin with the team praying and vowing to leave their mark on African film. If it is a Saturday, Wakastars, the lucky and talented children who have the chance be mentored by older Wakaliwood actors, will sing and dance and perform taekwondo. The other kids of Wakaliga, some of whom are perfecting their skills before they try their luck at an audition, will watch from a distance with admiration. Others know their parents are still reluctant to let them be a part of something new and exciting beyond their grasp.

“Acting as a decent career is a new thing here,” Nabwana explains. “But slowly by slowly, they will come to realise that there is a future in film no matter who you are or where you are from.”