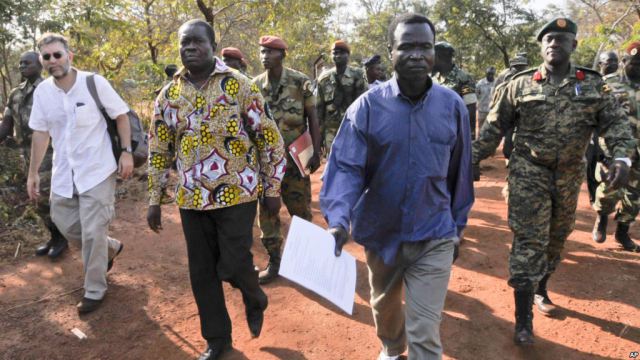 Testimony continued at The Hague Tuesday in the long-awaited International Criminal Court (ICC) trial of Dominic Ongwen, who faces 70 counts of war crimes and crimes against humanity related to attacks in northern Uganda more than a decade ago.

For a second day, a professor at the London School of Economics who conducted research on the Lord’s Resistance Army (LRA), in which Ongwen served as a leader, described the culture of the organization.

The expert testimony from Tim Allen included information about organizational relationships within the LRA, the use and training of child soldiers, and the spiritual dimensions that connected to LRA founder Joseph Kony.

“It is remarkable the degree to which the LRA was able to operate as a large cohesive group and break up into small groups and still endure,” said Allen.

Kony and LRA leader Vincent Otti remain at large, but Ongwen surrendered in the Central African Republic almost exactly two years ago. He was wanted for years in connection with murder, rape, torture, enslavement and other crimes committed during attacks on four camps for the internally displaced.

Those attacks occurred at Pajule in 2003, and in Odek, Lukodi and Abok in 2004, according to the International Justice Monitor project. Two other LRA leaders wanted by the ICC, Okot Odhiambo and Raska Lukwiya, have since died.

The war between rebels and the Ugandan government began in the 1980s, at the time that President Yoweri Museveni seized power, and ultimately gave rise to the LRA. Ongwen was himself a child soldier abducted on the way to school before rising through the LRA ranks, according to Human Rights Watch, and others have noted that Ongwen himself was a victim of a war crime.

The LRA continues to operate throughout the region, including South Sudan and the Democratic Republic of Congo, according to the African Union.

More than 4,100 surviving victims of the camp attacks are watching the ICC trial developments, HRW said.