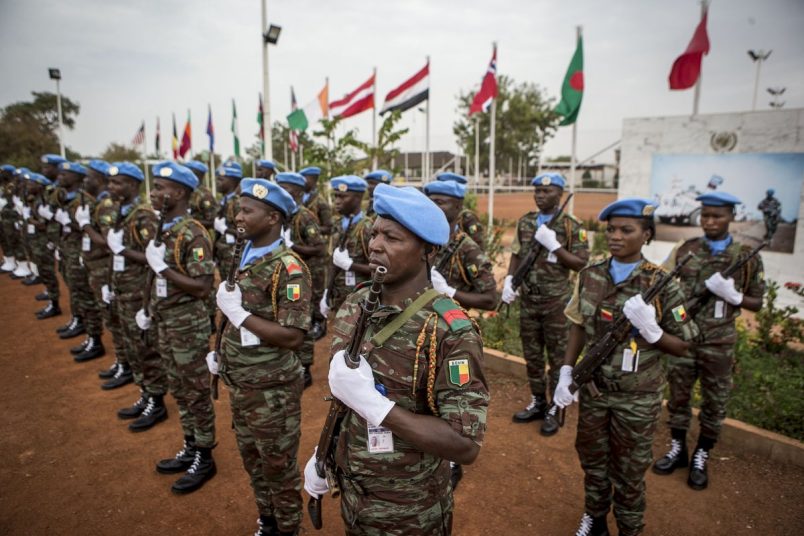 On Thursday, President Ibrahim Boubacar Keïta of Mali declared three days of mourning for the country’s 26 soldiers killed in an attack one week ago at a military base in Dioura, in the central part of the Sahel nation. The number of dead continues to rise, according to Malian sources.

It was a long three days.

“We are at war,” Keïta said, recalling the sacrifice of the Dioura soldiers during a military ceremony. “I hope my message is well understood, this is a word of order to the armed forces,” he said, stressing the need for “absolute vigilance” to prevent the exploitation of even small weaknesses.

“Our country, I say it once again, is not in peace,” Keïta said. “We face an asymmetric war, a treacherous war, without established rule, and everyone must know it.”

On Friday, the armed group JNIM (Group for the Support of Islam and Muslims) claimed responsibility for the March 17 attack. In a statement from Al Zallaqa, the media arm of JNIM, it said its fighters killed 30 soldiers and wounded a number of others while losing three of their own. The group said it seized artillery guns, machine guns, vehicles and other equipment.

“This raid comes in response to the heinous crimes committed by the forces of the formal Bamako government” and those who support it, the statement said in English translation. The group again claimed it was defending the Fulani, and denied a Malian Armed Forces claim that the JNIM operation was led by a deserter from their own ranks.

On Saturday came the news that ethnic Dogon hunters killed more than 130 ethnic Fulani herders in the village of Ogossagou Peulh. Like Dioura, the village is in the same Mopti region of Mali that bridges between Mauritania’s southeastern border and Burkina Faso’s north.

Some witnesses said Saturday’s attack was the worst in recent memory, in a region of well-established though escalating extremist violence where the deaths are all too common. They also suspect the attacks on Ogossagou Peulh and the neighboring Fulani village of Welingara – an unknown number of additional deaths are reported there – were in retaliation to the JNIM claim on the Dioura attack the previous day.

On Sunday, after three days of mourning during which Mali’s anger and grief was compounded by the fresh attacks at Ogossagou Peulh and Wengira, Keïta called an emergency meeting to address the problem. After opening with words of condolence, Keïta said he was getting rid of his top military leaders in the hopes of achieving a more effective response to protect all Malians. The presidency published a list of its personnel changes immediately following the meeting and said the Dogon hunter group was banned.

In recent years, extremists including the Al Qaida-affiliated JNIM have manipulated existing ethnic tensions over land and other resources in the region. The Fulani are accused of aligning with extremists, the Dogon are suspected of alliance with Malian security forces, and the village attacks illustrate in microcosm the country’s wider crisis and, for that matter, that of Burkina Faso and its neighboring Sahel nations. It’s compounded by climate change, weak governance and impunity for crimes across the Sahel. Some experts note a shift in smuggling routes that correlates with increasing violence in Burkina Faso and parts of Mali, suggesting yet another economic rationale for stoking the communal violence.

The Ogossagou Peulh and Welingara attacks may be linked to retaliation over the JNIM claim, but they also come as a United Nations Security Council delegation visited Keïta and other stakeholders in Mali to evaluate progress on peace ahead of this week’s MINUSMA mandate renewal deadline. They noted the Malian government’s will to act but also its failure to implement the four-year-old Algiers Agreement. The international community’s continued security commitment in Mali is linked to those goals, the council said. MINUSMA serves alongside 4,500 of France’s troops, now in a sixth year, as well as those from the United States, with support from the UK, Denmark, Germany and other European nations.

Meanwhile, they’re also fighting extremists with the 5,000-strong G5 Sahel force, made up of soldiers from Chad, Mali, Mauritania and Niger, this year with Burkina Faso serving as chair. The force remains underfunded, with about 75 percent of its operational needs covered last year, and still is not at full force strength despite France’s investment, as well as those pledged by China, Japan and many others.

At its February summit in Ouagadougou, the G5 Sahel nations urged the UN to act under Chapter VII, which would allow for funding and support to assist the G5 in addressing the deteriorating security situation. It just keeps getting worse: Even G5 headquarters was moved to Bamako after last year’s attack in Sévaré.

The latest Mali attack prompted another round of condolences and condemnation from French UN diplomat François Delattre and the visiting Security Council diplomats, from MINUSMA, from UN Secretary General António Guterres. A “shocked and outraged” Guterres said MINUSMA provided air support to the Malian government to prevent further attacks and assist with evacuating the wounded.

The attack also makes clear just how much remains the need for UN support  – and that there’s no end in sight.