Home>CUTTING EDGE>Mayotte quake swarm linked to newly discovered undersea volcano
By AT editor - 17 May 2019 at 3:58 pm 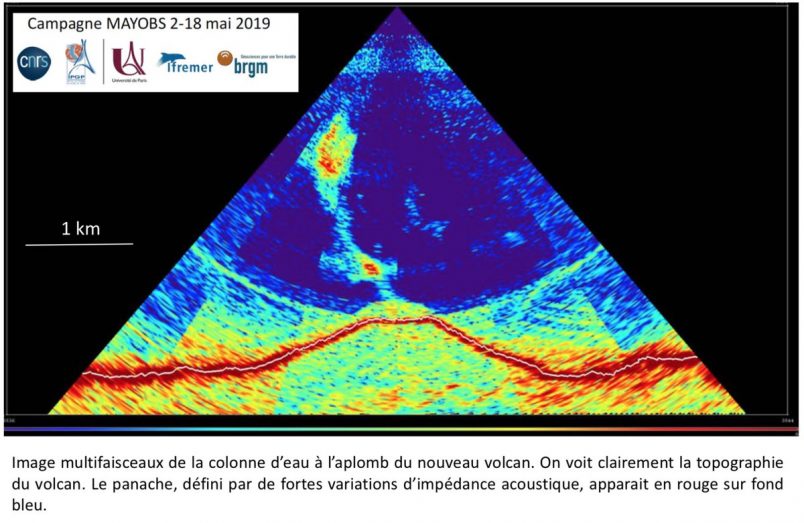 Scientists say they’ve discovered a new submarine volcano they believe is the cause of an unusual earthquake swarm that’s been affecting the Indian Ocean island of Mayotte for more than a year.

The new volcano is located 50 kilometers east of the island and 3500 meters below the surface, standing about 800m high with a base between four and five km in diameter. That’s according to a multidisciplinary team of scientists aboard the research ship Marion Dufresne, part of the fleet of France’s Institut français de recherche pour l’exploitation de la mer (Ifremer), a partner on the ongoing project to understand what’s caused the earthquakes.

The undersea volcano is spewing volcanic material to a height of two kilometers, but that’s not reaching the surface, and the volcano is linked to a rapid rate of shifting and sinking of Mayotte, the French government said. The sinking on the island’s east end has reached 13 centimeters since July 2018.

Mayotte’s prefecture office said Friday that following the discovery of this “exceptional geological phenomenon,” the government will deliver updates on risks to island residents within three months and “immediately strengthen the crisis management planning and preparation system.”

The swarm began on May 10, 2018, leading to hundreds and hundreds of seismic events since then. A magnitude-5.8 earthquake, the largest ever recorded in the Comoros basin, struck just off the coast five days later. Mayotte is part of the Comoros group of islands but remains a French territory, located at the northern edge of the Mozambique Channel between the southern African mainland and Madagascar.

The activity came as a surprise to residents, but it also surprised geologists with France’s geological agency BRGM, who continued to investigate the phenomenon with the MayOBS mission just completed in Mayotte. The first-of-its-kind mission also includes staff from France’s IPGP, CNRS, the University of Reunion and several others.