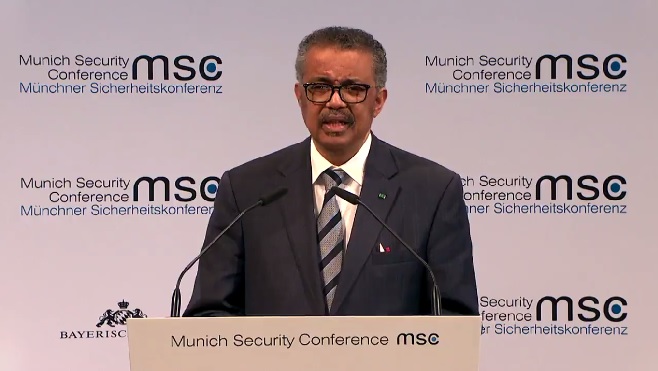 More than 500 leaders have gathered for the Munich Security Conference in Germany this weekend, among them the presidents of Burkina Faso, Niger and Chad to lead discussions on the situation in the Sahel. Yet this year, it’s the global coronavirus outbreak that has taken center stage.

The latest numbers from China, where COVID-19 infections were first reported to the World Health Organization on December 31, demonstrate a shift this week in how China is diagnosing and reporting the disease. The daily update from the National Health Commission on Saturday put the total number of confirmed cases at 66,492, with 1,523 fatalities in China. Deaths from the novel coronavirus also are reported in Japan and France.

Despite the security concerns of other nations that question China’s transparency on the COVID-19 risk,  WHO chief Dr. Tedros Adhanom Ghebreyesus, speaking at the Munich conference, again praised Beijing for its management of the outbreak.

“It’s impossible to predict which direction this epidemic will take,” said Tedros. “What I can tell you is what encourages us and what concerns us. We are encouraged that the steps China has taken to contain the outbreak at its source appear to have bought the world time, even though those steps have come at greater cost to China itself. But it’s slowing the spread to the rest of the world.”

Tedros said WHO was also encouraged that outside of China, officials are not seeing widespread community transmission. Yet that clock is ticking, with evidence of such transmission occurring in Japan and Singapore, Germany and France, and certainly among passengers aboard the ill-fated Diamond Princess cruise ship owned by Carnival. Some 285 people have tested positive aboard the ship, which was stranded off the coast of Japan with an original count of 3,700 passengers and crew.

Another ship, the Holland America Westerdam with about 2,250 aboard, finally found a Cambodian port to allow passengers to disembark. Now one of them, a United States citizen, has tested positive too after traveling on to Malaysia, according to that nation’s health ministry.

On the African continent

Egypt’s ministry of health said Friday that a 33-year-old male foreigner who flew into Cairo International Airport has tested positive for the disease. That patient has had 17 contacts, all of whom are now in home isolation.

“As I have said before, we anticipated that the COVID-19 outbreak would inevitably impact Africa,” said Dr. John Nkengasong, director for Africa CDC, in a statement issued Saturday.

“That is why Africa CDC has been working actively with African Union member states and partners in the past four weeks and investing in preparedness and response to the disease,” he added. “This detection by Egyptian authorities is evidence of the strategy that Africa CDC and member states have adopted in combating the disease.”

Africa CDC is hosting a training session this week in Nairobi for 40 people from nine countries, including Egypt, to improve their COVID-19 response at points of entry. That training, which includes representatives from the International Civil Aviation Authority (ICAO) and Kenyan and South African airline carriers, follows a session last week in Senegal.  Experts from 16 countries all returned home last Sunday with new training and kits for testing.

“In the next two weeks, further training and resources will be provided to Egypt and other at-risk countries for infection prevention and control in healthcare facilities, medical management of COVID-19, and risk communication and community engagement,” said Nkengasong.

Because of a combination of factors including exposure risk and national capacity, WHO has identified 13 priority-risk African countries: Algeria, Angola, Cote d’Ivoire, the Democratic Republic of the Congo, Ethiopia, Ghana, Kenya, Mauritius, Nigeria, South Africa, Tanzania, Uganda and Zambia.

Egypt was not among them, but Cairo was listed as the only aviation destination on the continent within a list of Top 50 cities as modeled for risk by Canadian and British researchers in late January. Other countries who are or have investigated (but not confirmed) coronavirus cases include eSwatini, where a woman traveling from China entered through South Africa. The eSwatini health ministry said Friday that the woman was identified at a health facility in its nation.

While public health officials focus on identifying, containing and treating coronavirus patients, the Tedros speech at the Munich Security Conference underscores the potential for security crises. In China, where millions of people are trapped in their own homes or forced into quarantine centers (760 million, according to one New York Times calculation), there are reported episodes of violence as people cope with the stress.

The United States Marines released their coronavirus plan earlier this week, while an executive order to prepare for a pandemic was issued by the U.S. Joint Staff and approved by Defense Secretary Mark Esper, according to reports.

From Australia to Canada, many nations have reported incidents of xenophobia, with Asians harassed or their businesses avoided, while in some cases these incidents escalate into physical altercation. It’s not hard to imagine how food and water shortages, mandatory detentions, or inequities in access to medical care could cause tensions to flare – and that’s especially true in some African contexts where political differences or baseline community trust are already destabilizing.

Meanwhile, leaders – most recently in Tanzania – strive to tamp down the rumors and disinformation swirling around the illness, and that alone can lead to heavy-handed and authoritarian policies. “We need a vaccine against misinformation as well,” says Dr. Mike Ryan, the head of WHO’s health emergencies program.