Home>News>Kovind announces Indian embassy, investment for Equatorial Guinea
By AT editor - 9 April 2018 at 12:52 am 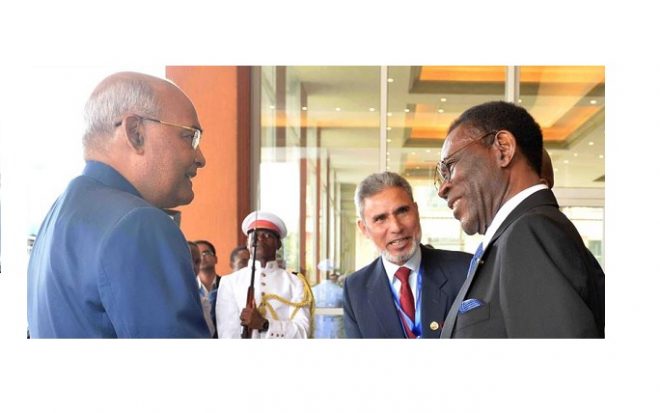 The two met at the Presidential Palace in Malabo to discuss economic development and investment, as well as security. Kovind said India is eager to assist the small but resource-wealthy West African nation in project development, in keeping with credit extensions of USD$10 billion over five years for African countries first announced at the India-Africa Forum Summit of 2015.

Speaking to members of Equatorial Guinea’s parliament, Kovind acknowledged the shared history of the nations’ colonial past and a commitment to economic diversification and climate change action.

“We are also keen to enhance our development cooperation partnership in keeping with the cherished values of South–South Cooperation,” Kovind said. “It is in that spirit that we have offered assistance to set up an Entrepreneurial Development Centre and an English Language Laboratory here.”

Kovind also met with the Indian community in Malabo before continuing his journey. The three-nation African tour also includes a stop in Zambia.

The Indian president is on his third trip abroad since taking office in July 2017, all of them in Africa as Prime Minister Narendra Modi has made strengthening ties with the continent a priority. His previous stops included Mauritius and Madagascar in March, and Djibouti and Ethiopia last October.