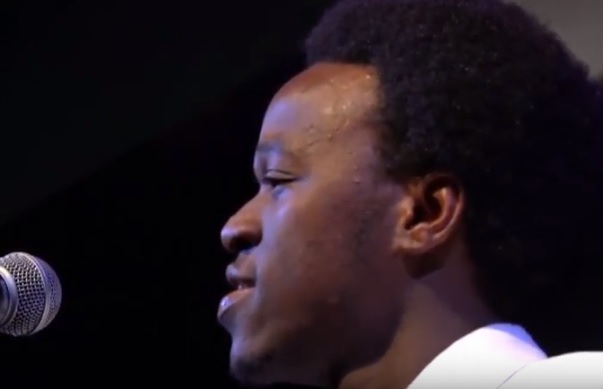 A Zambian asylum seeker in the United States is anxiously awaiting a court decision to determine if he’ll be able to participate in a spoken-word poetry contest that he’s currently been barred from entering.

Allan Monga, 19, arrived last summer in the coastal city of Portland, Maine, and lived in a teen shelter the first three months in the U.S. The transition was difficult but by autumn, he was enrolled at a local high school and had discovered a love of poetry, according to Maine Public Radio.

Monga heard about Poetry Out Loud, a program for high school students administered by the U.S. National Endowment for the Arts (NEA) and the Poetry Foundation, and was encouraged to enter. That wasn’t a problem at the local level, where Monga performed his recitation of a 1907 W.E.B. Du Bois work, “The Song of the Smoke.” Far from it: He advanced to his state competition, and he won it.

That’s when the NEA notified the Zambian that because of his migration status, he would not be allowed to compete in the national competition set to begin April 23 in Washington DC. The rules require that student competitors be U.S. citizens or permanent residents – and Monga, though in the country legally, is neither.

His poetry predicament got the attention of local officials and lawmakers who have taken up his cause.

“As a young person seeking asylum in our country—and an exceptional performer—I think it would be terrible to exclude Allan’s voice from this competition,” said U.S. Congresswoman Chellie Pingree, who represents Monga’s community. “I don’t see a statutory basis to keep him or other outstanding students like him from competing and I hope the NEA reconsiders its decision.”

So far, the NEA says it is not reversing its stance. A judge said he will decide by Friday if Monga can compete.